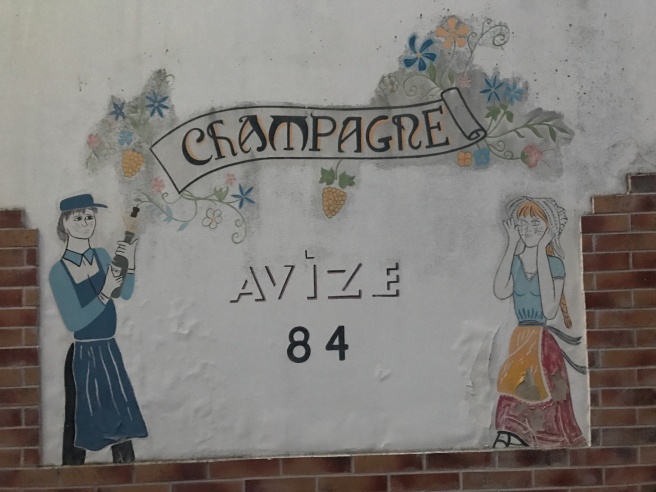 This post is now two weeks in the making. After some nagging, of the Jang persuasion, here we are, with my take on the awesomeness that was my Thursday with Guillaume…

Jacques Selosse is cult champagne. The domaine was founded in the 1950s, but it wasn’t until Jacques’s son Anselme took over in the 1980s that this grower creeped its way up to to icon status . It wasn’t by chance, and as Jean Paul Chiquet of Jacquesson says, “I love their Champagnes, but I don’t want to make them.” By this he means that Selosse is in a constant search for the next thing to bring his pinnacle level champagnes just one micro-level higher. This was a point that was abundantly clear after a cellar tasting and tour with Anselme’s 28 year old son, Guillaume.

There were 7 of us + Guillaume on this tour; one from Korea, two from Japan, one from Paris (in a Tesla, which everyone was very very impressed with…), a couple from Portland, and myself. The Parisian served as a translator, as Guillaume didn’t speak much English, which I found surprising (says the girl who works in fine wine who can’t pronounce Avize…)

Guillaume gave us a brief rundown of recent vintages:

2016-> horrible weather! Tons of rain until June which upset flowering and fruit set. July brought cool mornings and warm afternoons, perfect temperatures to stunt the growth of the vine. It was a late harvest, September 25th, with Pinot Noir proving to be pretty homogenous, but Chardonnay exactly the opposite with huge variability in ripeness levels.

2015-> a good vintage for ripeness, which is always what Selosse is seeking out – climate change has been great! As they waited for ripe, ripe, ripe grapes, some rain (14mm) came in and brought some dilution to the Avize fruit. Not so bueno. 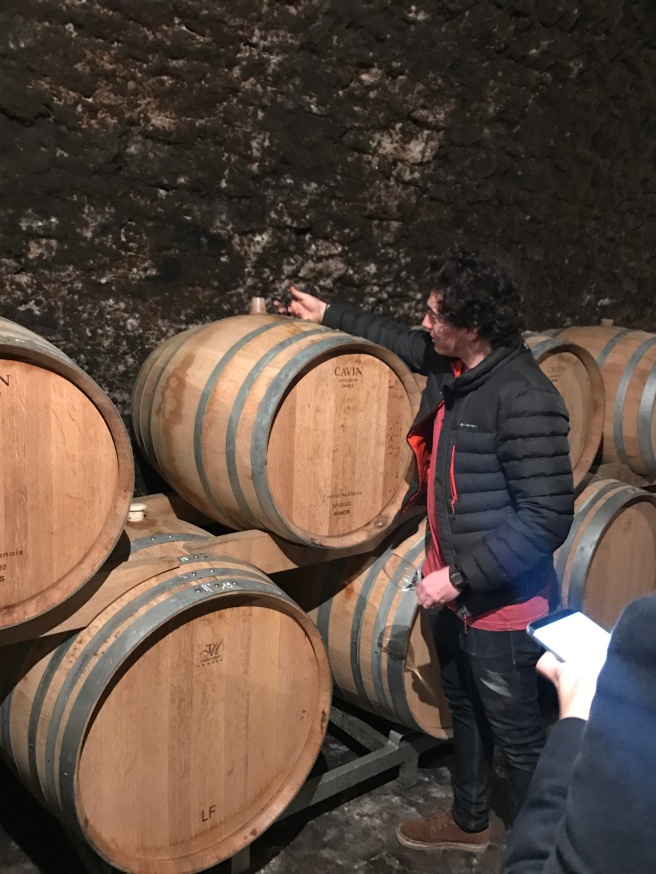 Then we moved onto the fun bit of tasting the vins clair. This is the first stage of Champagne making where the wines are essentially made like any other wine, but because they are picked so early and the climate so cool, the levels of acidity are generally through the roof. This being my first taste of vin clair, I was pleasantly surprised at how drinkable they were. They well could have been Burgundy barrel samples.

There was some info lost in translation, but from what I gathered each of the 65 parcels is vinified separately. Some of the parcels, like Le Bout de Clos, include both Pinot Noir and Chardonnay, which are pressed together– this is cool and very unique.  Every barrel is treated in exactly the same way (although there are differing barrel sources), and it is upon final tasting that its fate is decided. 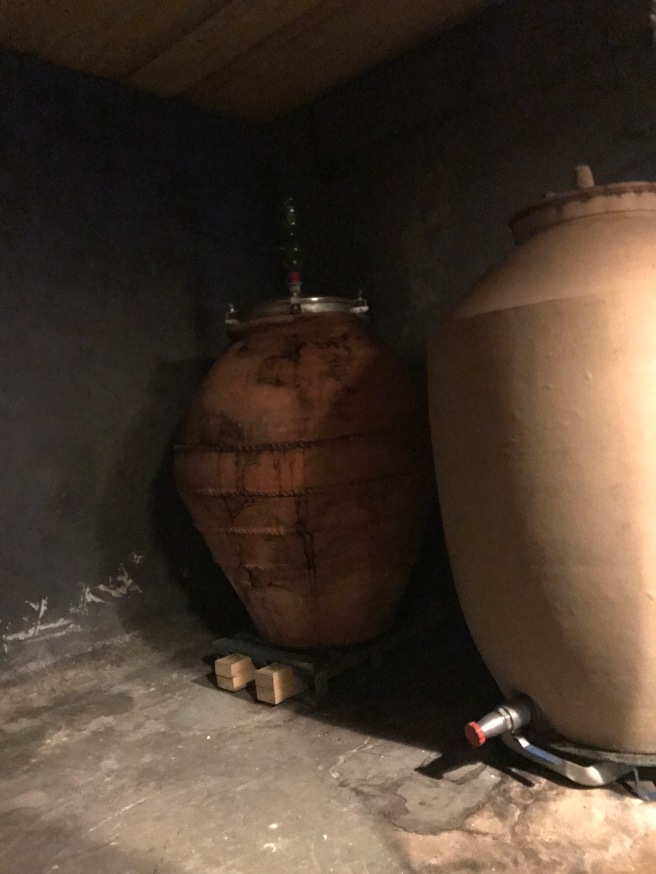 We tasted our way through the barrel samples and made our way back to the tasting room. 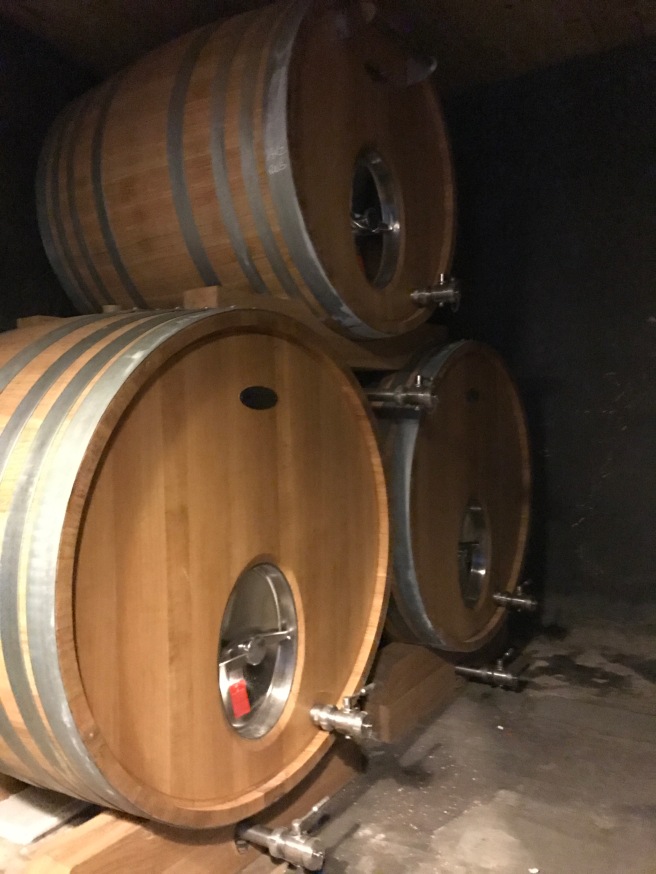 The now-famous perpetual reserve solar. Guillaume lit up as he took us to taste un experience. This is the first time Selosse is making still pinot noir (chateaux champenois), and what a treat. Still in barrel, it was totally floral, crunchy, and ultra perfumed, which we learned was from carbonic. Cool stuff.

Then the serious ridiculousness started. Barrel samples are lovely, but they’re infants wearing the cloak of wood. These bad boys above, have come together have years in the bottle, resting on their well manicured lees. We began with Initial which was full bodied, mineral flecked, and just really apply and delicious.

We moved onto Originale which has zero dosage and is much leaner and more precise than the Initial.

Then onto the single vineyards. Eeeeee!!!

Les Carrelles- 100% Chardonnay with tons of cream and vanilla.

Onto vintage.  2003 disgorged in 2015. Rich, honeyed nose, with lanolin and birdseed (my hallmark for charddy champagne). My exact note reads, “This is awesome and so complex and so long and so good. Wow.” It finished nutty and had some lifting VA and a long mouthwatering finish.

Next we moved to the 2005 disgorged 1 year prior. 100% Chardonnay. This was more lean and elegant with fresh vanilla on the finish. A more food friendly sparkler with some earthy notes, yet still cream on the finish.

And then life changed a bit. We had 2005 disgorged 3 years ago. Someone said this was Substance, I thought it was just Millesime, but again, there was loads lost in translation. “Hairspray VA and apple nose. Breadth, complex, layered, mineral finish. Tension!! Balanced. Perfection? 8000% awesomeness. ” This is about as good as Champagne can possibly ever get I’m pretty sure. Fucking rad.

We had the rose, which, surprise surprise, was also awesome, and then Excuse which is the Demi-sec with 24 g/l residual sugar (Initial + big dosage). It was cool but felt a bit disjointed after all of the super dry wines ahead of it. 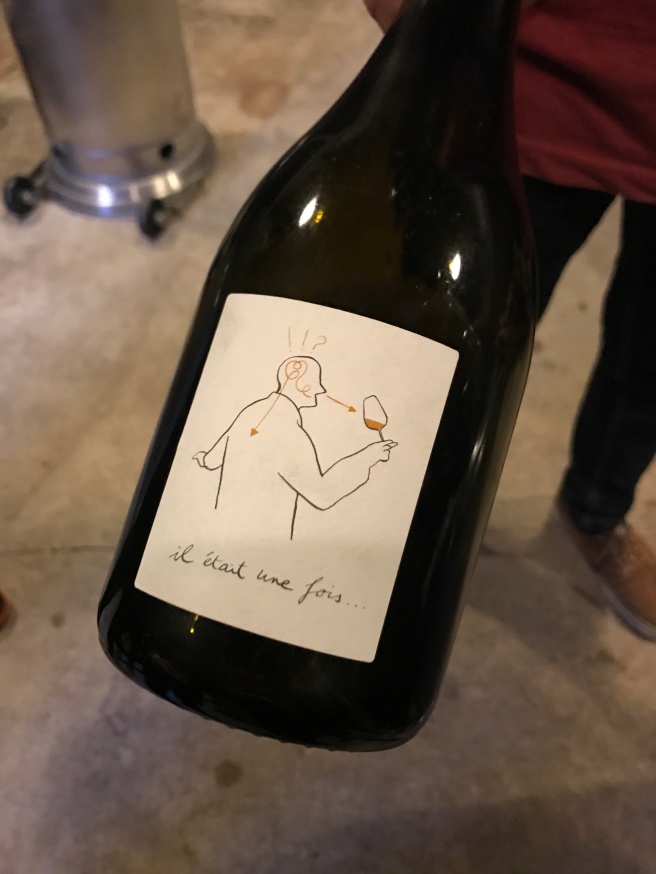 Once upon a time…we got a taste of something totally special. This is the fortified (a ratafia??) which is barrel aged for 10 years before release (estimated release date 2020).

Tawny. 18% abv. 150 g/l rs. 2,000 bottles only. Caramel and totally oxidized and delicious begging for stilton cheese. This was cool.

BFFs. Well maybe not, but color me impressed. 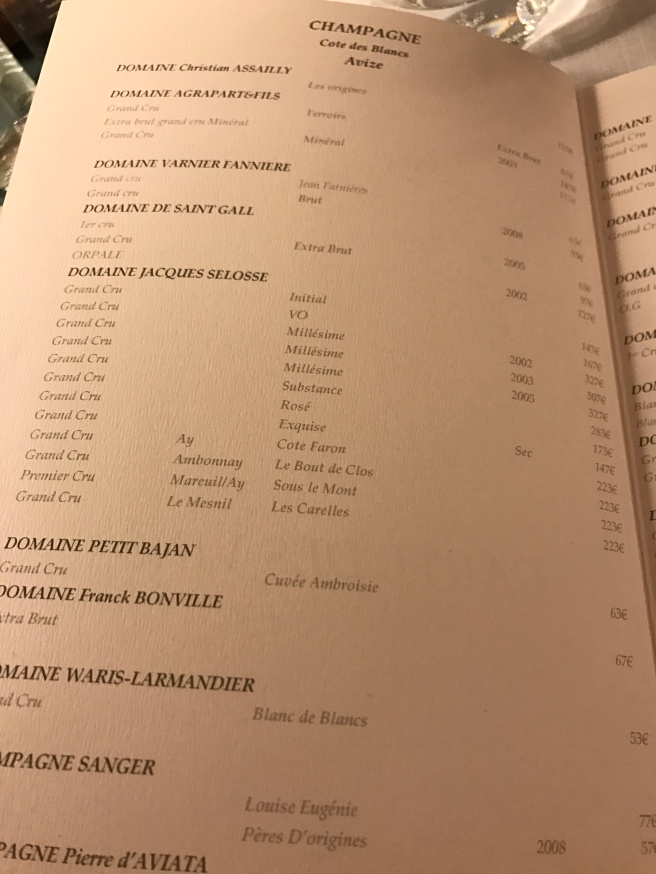 There was absolutely zero spitting on this tour. We drank a solid bit of wine, but being the professionals/diehards we are, there were more Champagnes to get through.

Everyone on the tour was staying at the hotel and dining at the restaurant. If you ever go to Champagne, you HAVE TO EAT HERE. It’s that good. 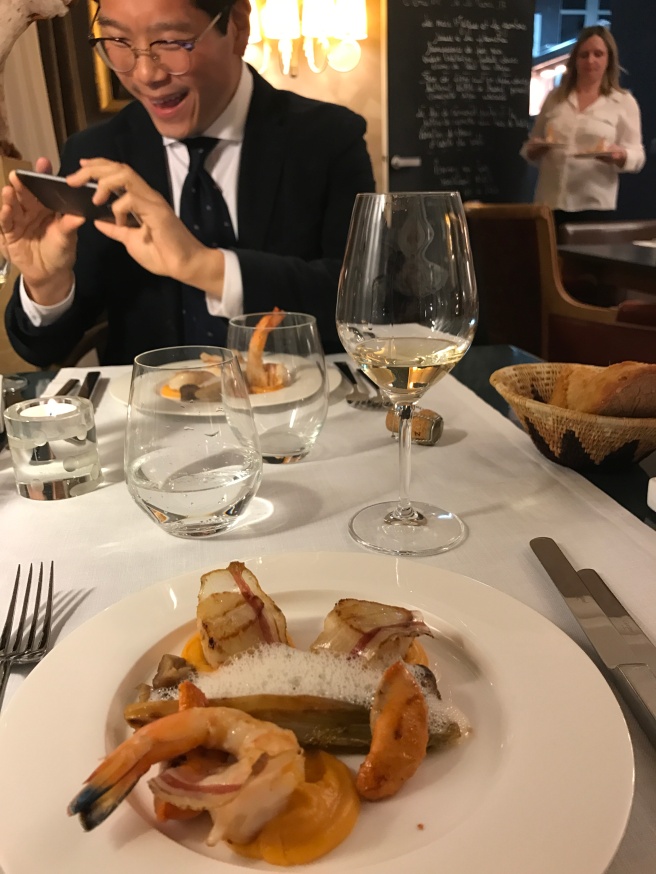 After we get well into the second bottle, my new Korean best friend commented on my excellent drinking ability.  Comsahamneda. 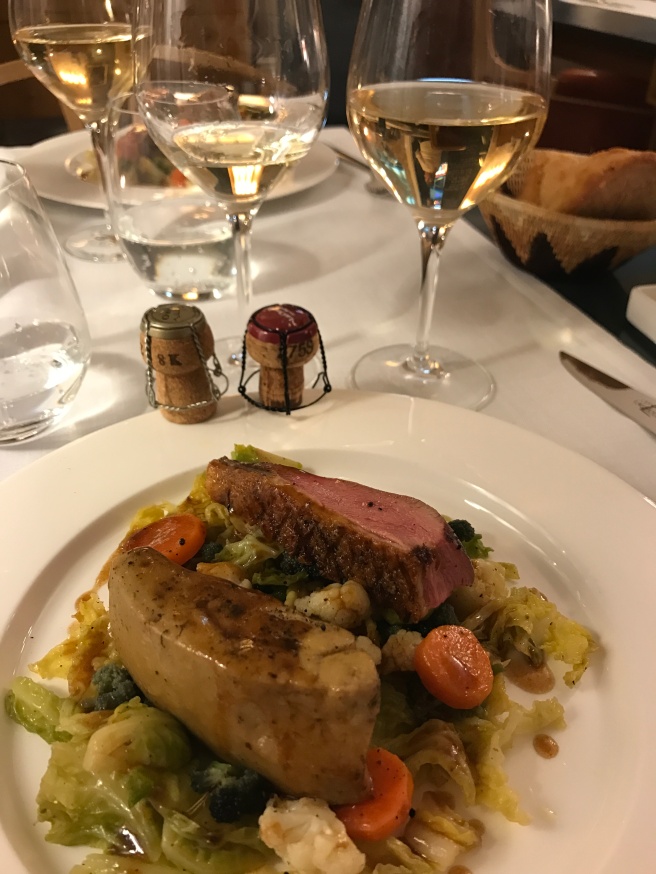 Course 3. This was AWESOME. Duck and foie over veg. Get better.

This was totally unnecessary, but also totally delicious.

As we’re finishing up dinner, the Parisian comes over to our table to introduce his dining companion…

I know all of the Champagne nerds are loving this, and for everyone else, he’s the Chef du Cave at Dom Perignon!!! Just google it.

One thought on “Selosse.”