After a 2 month hiatus, I am back with moar guts thanks to some Jang persuasion (pestering?).

The reason for the radio silence stems from a little exam I was preparing for, the stage 1 assessment for the Master of Wine. After a year plus of study I still didn’t feel totally prepared walking in, but was looking forward to having it over with, so off to San Fran I went. Only after sitting on the tarmac for 4 hours. I’m telling you, me and American flights are no Bueno.

San Francisco is a pretty amazing city. My San Fran experiences were pretty limited to family vacation 20 years ago, and a quick one-night-only free for all with Lara two years ago, where Lara and I had too much fun. This trip corroborates what I already knew; this is a city, similar to New Orleans, that leaves you completely shattered and broken, but only after some pretty ridiculous self-inflicted antics. 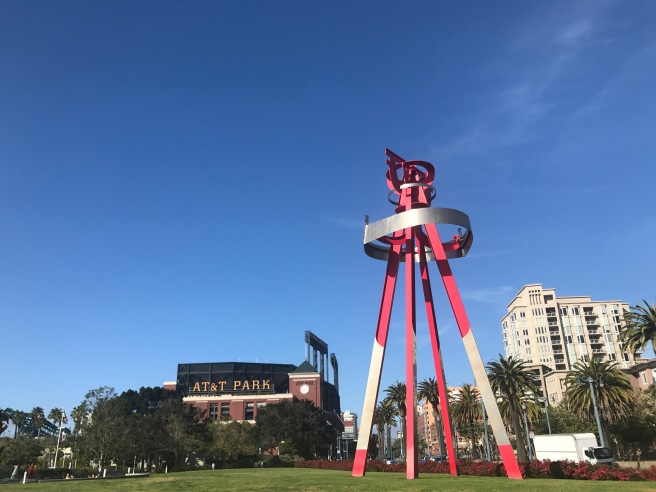 Thanks to jet lag and mounting anxiety,  I was up super early each morning to get in some pretty major runs a.ka. sightseeing. I stayed in this awesome Airbnb on South Beach, which was super convenient to run up to Fisherman’s Warf (see seals above), and down to the baseball stadium, all of which were right on the water. I should also mention that this being June it should have been much much warmer back in New York. It wasn’t. In fact, I’m pretty sure it snowed the day I left.

Some last minute cramming + an avocado toast later, and I met up with the NYC MW S1 contingent. Look at those faces. The stress is palpable, but the view stunning. We met in Gabriella’s baller room for a last ditch tasting before heading out for dinner. 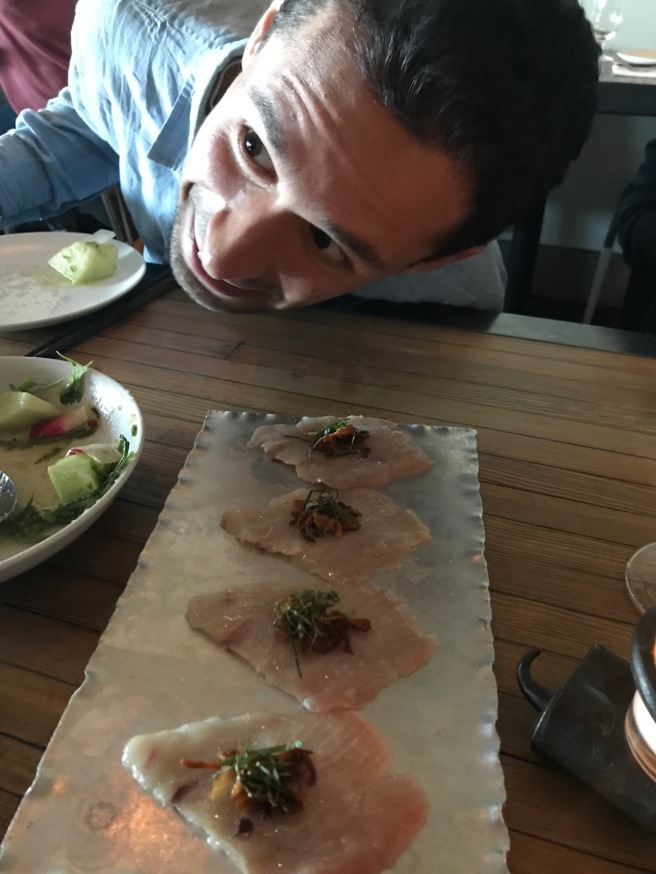 We went to Slanted Door, which everyone seemed very impressed with the fact that we walked in without a reservation. The food was excellent (hamachi, imperial rolls, grapefruit and jicama salad, Dungeness crab noodles, and bok choy), as were the wines. We started with an ’09 Muscadet from L’Ecu, which was super interesting and totally untestable, which drove its intrigue even deeper.

And then enjoyed an Alzinger Gruner. This is the wine god intended for Dungeness crab cellophane noodles. Truly. 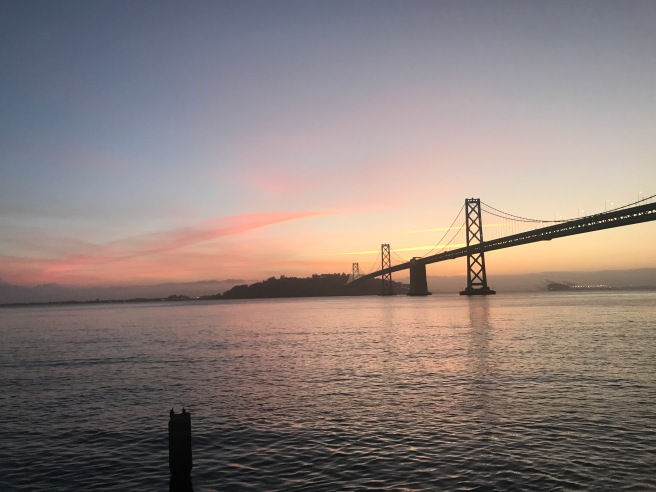 A 4 am wake up was conducive for a 7 mile run, coffee, and breakfast before heading in.

41 of the 97 stage 1 candidates sat in San Fran. One no show, and one almost no show after a nightmare uber experience. 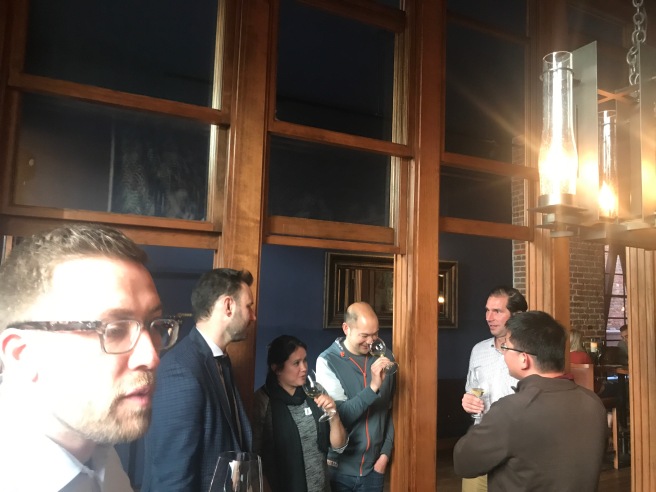 We all toasted with a glass of Ridgeview, who’s winemaker Robin, was sitting down for the theory portion of the exam back in jolly ole.

I travel to the other side of the country and am greeted by the same face! C-Jang showed up for a special cameo appearance just in time to watch months of stress and study unfurl into out and out hedonism. 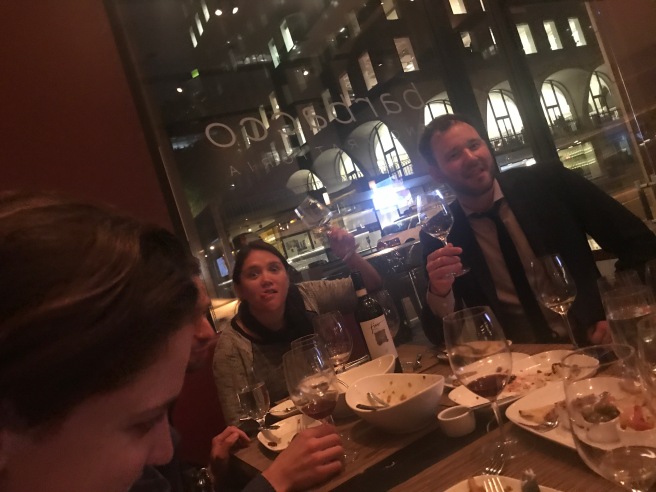 And then there were 5. As important as dinner was, so were late night negronis. You’d think I would have learned by now that drinking straight liquor at 3 in the morning strangely doesn’t fare well for the head the following day, but alas. Here we were.

This bartender was awesome.

The night ended with orange cupcakes, ice cream, and jumping on beds to Biggie Smalls, naturally.

Gabriella and I are pretty sure we’re still fighting the hangover 2 weeks later.

Speaking of 2 weeks later, here were are and the the test is over. I’m back in New York (after a missed flight, nbd) and last week the wines were posted. I did pretty well in terms of varietal and place, but won’t find out the results until July. In the meantime, you can find me…. 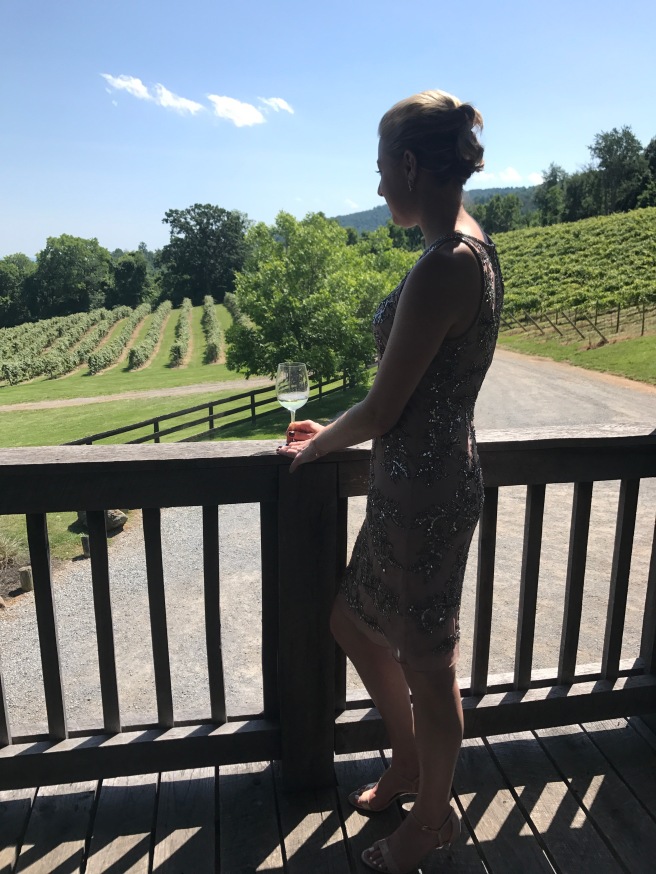