This isn’t in order, but you weren’t there and won’t know the difference anyway. Here’s a look into the stage 1 Master of Wine seminars in Rust, Austria, January 2017. 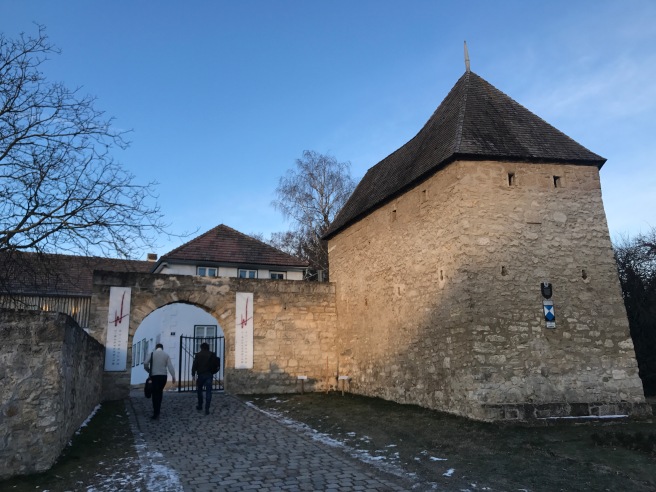 John Hoskins MW is the final word on the MW examination and an absolute rockstar. 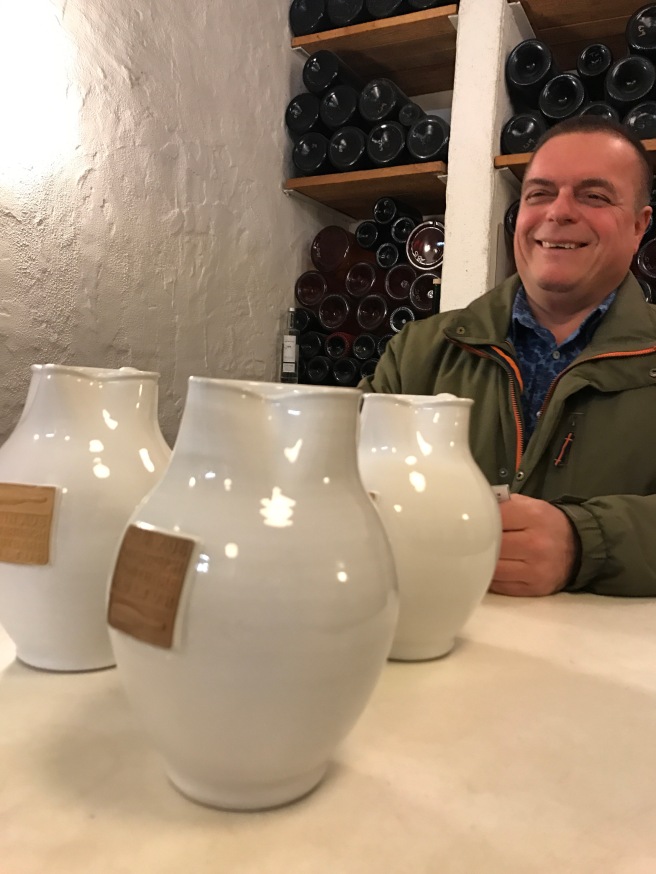 On our first night we went around visiting a few local cellar doors. I popped into Triembaumer to visit Gunter, pictured, and to taste his lovely range of wines. Sauvignon Blanc, Chardonnay, Blaufrankisch (staple of the region), Zweigelt, Traminer Spatlese, Beerenauslese Chards, and local specialty- Aubruch.

We also had some barrels samples of the 2016 Zweigelt. The wines were all balanced and clearly well made, but none of them really blew me away. In general, I learned Austrian wines are not my favorite. They’re more a lunch time quaffer, than something I can get terrible excited about.

The bread, on the other hand, I can totally get on board with. 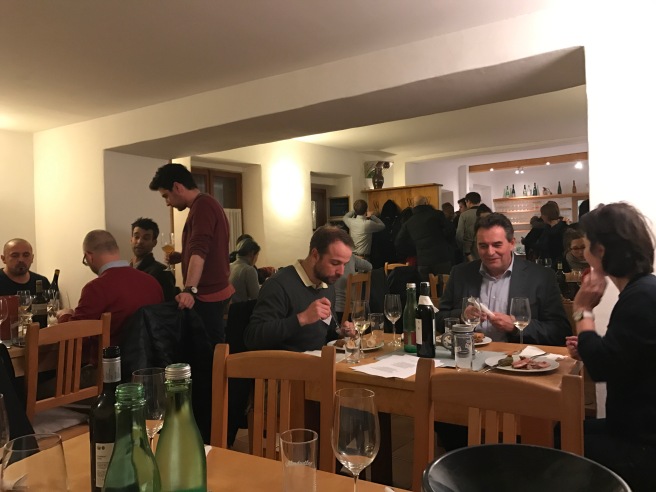 Post tasting, the 41 of us regrouped for dinner at a local Heuriger, which is essentially a German beer hall but Austrian and with wine instead.  More bread, cheese, meat, and pickles, and of course, Gruner Veltliner.

Pretty much every night of the trip ended like this, back the Seehotel with leftover bottles.

A few nights even ended like this, with challengers taking on Nicholas Paris MW in arm wrestling contests. He remains unbeaten.

Even a Gruner Pet-Nat. If you’re not on the Pet Nat train yet a) where have you been b) you can read more about it here: http://punchdrink.com/articles/what-is-pet-nat-really/   Pittnauer is also a part of the Pannobile group, which you learned about in the last post.

We had exactly 2 hours of free time during the week, so I managed to sneak in a run and a mini-tour of greater Rust.

Further proof that you can’t make wine in ugly places. 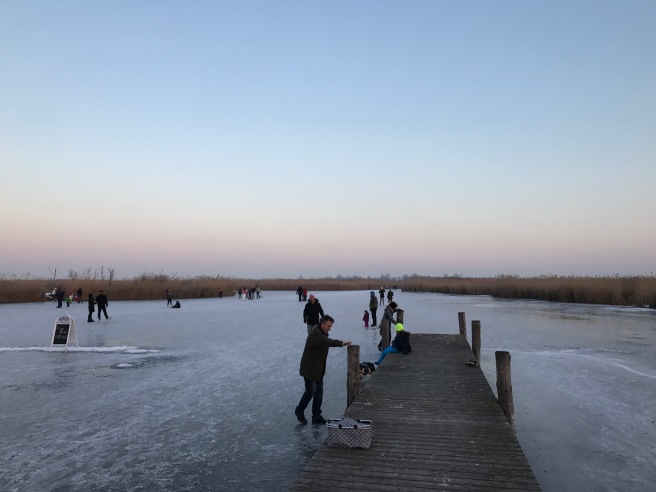 Right behind our hotel was a little tributary of the Lake Neusiedl. Our only rule from the MWs was not to go on the lake, as they weren’t confident it was frozen all the way through. I’m fairly certain it was judging by all of the parents and their little kids, but I’m not one to break the rules. So here I stood.

The MWs did a really incredible job ensuring we got as much from our week as possible. After we spent the morning pruning, we hit up Umathum for a panel tasting of reds.

Heinrich (which was one of the only wines I knew thanks to Schmidt Vinotek HK), Reinish, and Markowitsch.  We got to know Blaufrankisch, St. Laurent, and Zweigelt.

After the red panel tasting we bused over to Leithaberg for an all white panel tasting. Donnerskitchen, Himmelreich, Georg Prieler, Markus Altenburger, and Grobhoflen. Again, the wines were all tasty, balanced, clean, but nothing here was changing my life. 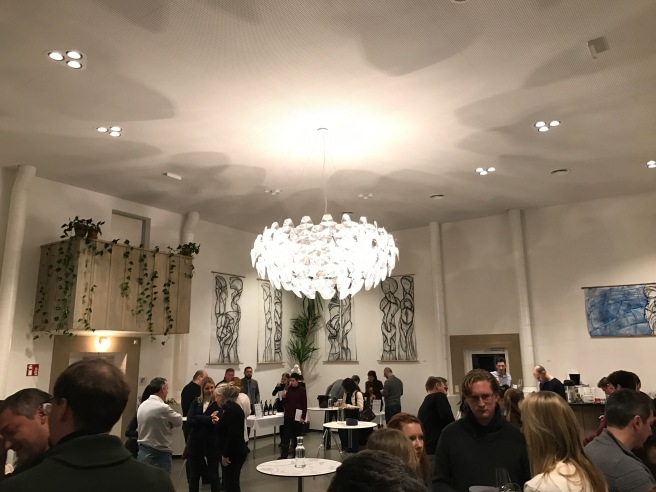 Post panel tasting, pre-dinner, we squeezed in a walk around tasting. Birgit Braunstein was my favorite for her angora aged beauties. 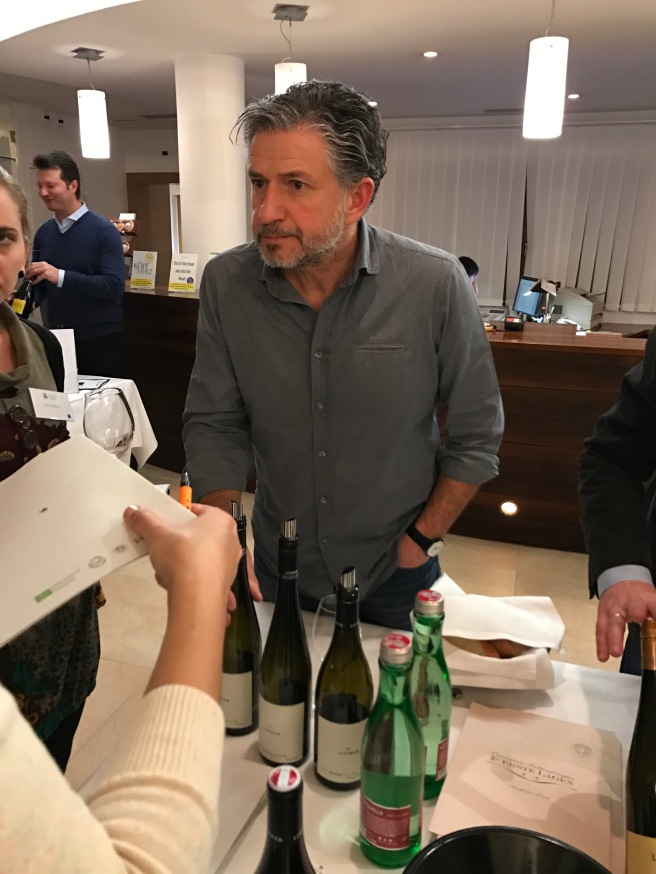 One of the nights a bunch of wineries from Styria, Burgenland, and Neirderostereich came into our hotel for a walk around tasting. Loimer, pictured above, was definitely a standout. He’s a biodynamic producer who believes in skin contact for his whites, which imparts a really awesome texture and a real sense of cohesiveness. Loved em.

The handsome men of Huber and Made (I think).

This is what we had for lunch everyday and dinner most. I think everyone was pretty over it by the end, but I was pretty chuffed to have salad everyday, which is usually a rarity on wine trips. 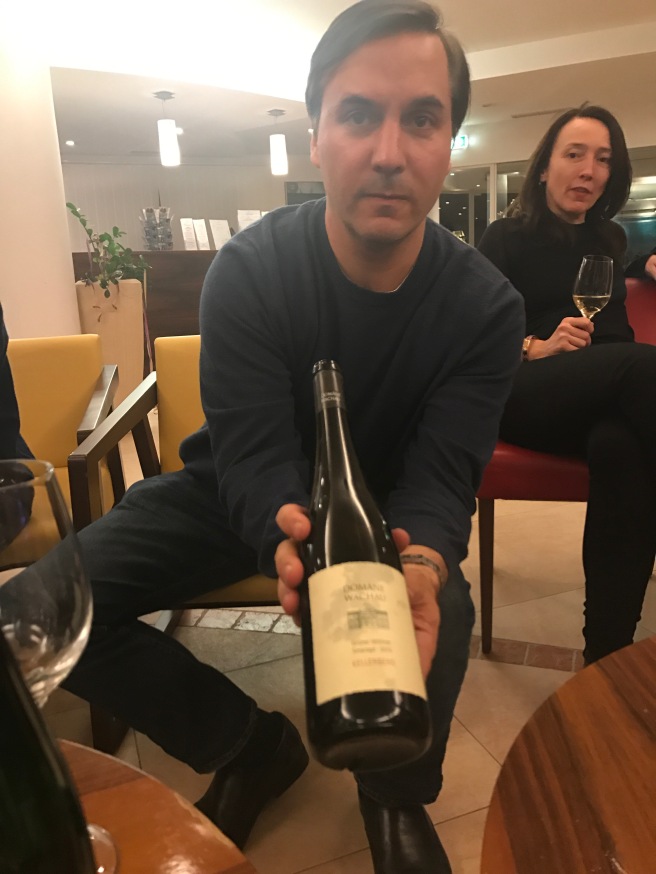 Post tasting dinner in the hotel- there were days when I didn’t break 2,000 steps- and back to the lobby for more wine with Nicholas Paris MW/MS. You may recognize him from the movie Somm. More on that later…

Early in the week I was still pretty jet lagged and managed to drag myself on a freezing pre-dawn run.

Wednesday evening was our only night off, so of course I booked in an appointment with Paul Schandl (thank you Robin and Gino!) which was absolutely wonderful. 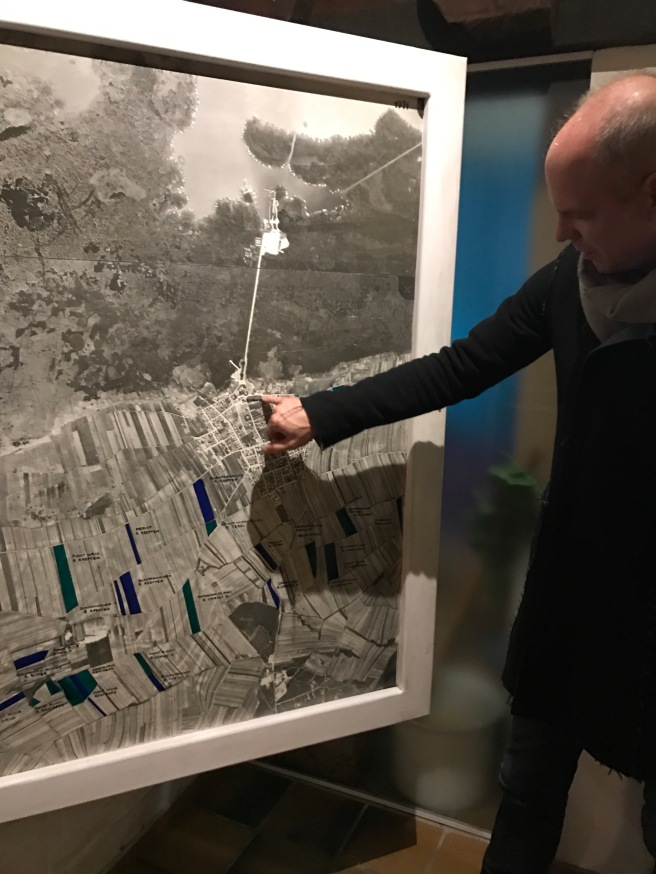 Paul and his wife Elle were so warm and welcoming. They taught me all about Rust and their history…

And after a few tastes of their current offerings, led me down to the cellar to pick out some fun old bottles.

Grey mould is the good mould. Every bottle was numbered and logged into a ledger, which was stolen by a kid on a tour several years back. That was the last of the tours.

They were super generous and we opened up the following: 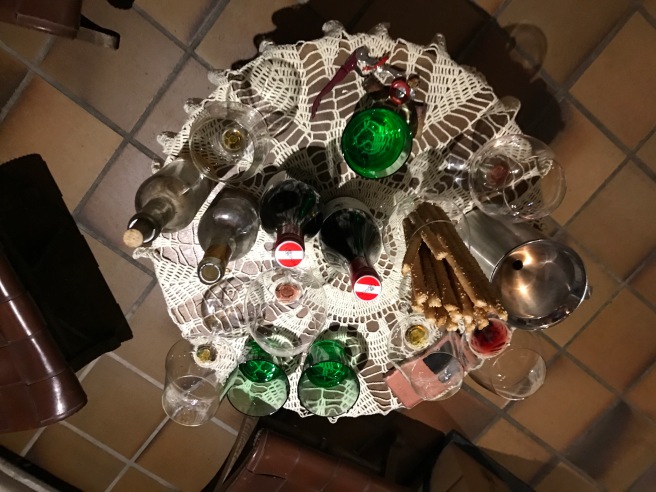 This was one of the absolute highlights of the trip! Paul was nice enough to let me bring some of the leftovers back to the hotel where we polished them off rather quickly.

On another evening we hit up the Palace Esterhazy for a student led tasting, tour, and dinner.

Where Haydn used to hang. 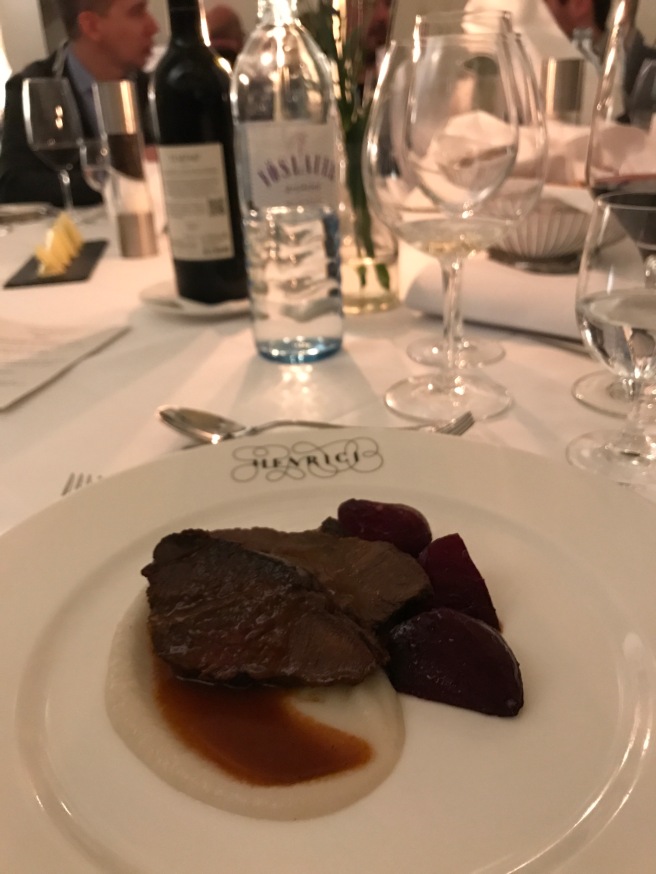 I brought Macari Cabernet Franc which is made by my friend Gabriella’s family in the North Fork, Long Island. The wines were delicious, a bit hit, and especially relevant since she’s also studying for her Master of Wine.

One day we had the President of a division of LVMH come in to speak with us. It was interesting to hear a corporate perspective. We tend to be a bit snobby working in the trade, and it’s important to remember that this is what most people are drinking. For better of worse….

On our last night we had our gala dinner, at none other than the dining room where we spend most of our meals #notacomplaint. We began the evening with some Bollinger…

Everyone was asked to bring a bottle, so being the only American, I thought it befitting to bring a Napa. Tribeca Wine Merchants kindly donated this delicious drop of Syrah. It was fab but such a baby!

Lingzi was the one of two peoplepe I knew walking into this week. We had met in Hong Kong several years back when she did some writing for Ginsberg+Chan. She’s now based in Bordeaux and we get to hang out there in March. I love the bridges that wine builds.

Basically the dinner was a free for all. Everyone got a taste of everything. Hady, a winemaker in Lebanon, seems quite pleased with his bottle.

What’s a good night out without some wine students going crazy at the basement bar. Everyone in the room was up on that table at some point. The party didn’t stop until 6 in the morning….

…which didn’t bode well for the 8 am bus to Vienna for a tasting the next morning. I woke up at noon, had a minor meltdown, but was calmed down when I ran into Hady in the lobby. We shared a 100 euro cab to the airport. Upon arrival I ran into Caro MW and Jane MW for some hair of the dog.

Looking fresh sans shower after a 6 am night. I had a glass of Blaufrankisch with Christine, who I also know from Hong Kong and saw in New York for course days in October. I believe she is 1 of 2 people that I have seen on three different continents. Francesca Martin is the other…

Landed in Belgium, had the requisite ale, and hit my airbnb for a hard night’s sleep.

How charming was my airbnb!?

That’s it. You have officially seen my week in Rust. Dallas, coming at you soon…

One thought on “Scenes from Austria ”